Short Stories that feed you 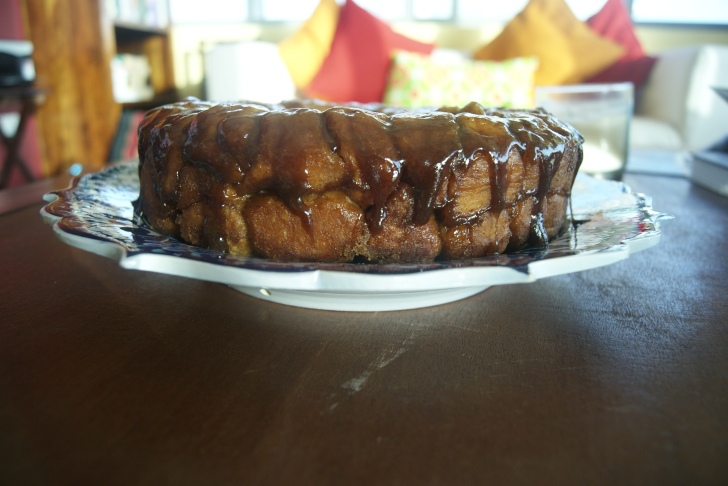 For years (4 years, give or take some months), my friend Alizeh has been asking me to make her monkey bread.  She loves it and I had never made it before (or even heard of it before she mentioned it).  For whatever reason, I never made it.

I suppose since I didn’t know what it was, I was a bit apprehensive.  It seemed difficult to do, though I never really looked into making it.  Alas, Alizeh decided to leave me and move to London (how dare she!!).  As a result, I felt bad for never making her one wish and so I figured this was the perfect opportunity.

Last week, she had a dinner at her place (AMAZING food, I ate so much, I felt a bit sick afterwards) and thought I would surprise her with the monkey bread.  Feigning illness during the day as my excuse not to make a lunch with her and the other bestie, I took to trying to make monkey bread.

So this is where the story turns – in my usual determination, I wanted to make the dough from scratch.  And it all went wrong, so wrong! I did all the steps required, the yeast, the rising, the warm place to put the dough but it just was not working.  Either I didn’t have enough yeast, or too much flour – the dough did not rise enough and also was tough.  I thought maybe it will still work, so I went forth and made the sauce and stuck it in the oven.  After the allotted time, I took it out of the oven and nope – it did not work.  Not at all.  Heart breaking!!! Everyone has their downfalls and apparently monkey bread was mine.

I was crushed but luckily still had time.  I rushed to the supermarket and bought ready made pastry dough (the pillsbury kind).  No one needs to know!! Except you do, because using the ready made dough was SO incredibly easy.  And tasty.  Easy and tasty…I feel like I won’t attempt making the homemade dough for a while.

I bought 4 cans of the ready made dough and used 3 of them.  With the fourth one, a few days later, I made mini monkey bread (also amazing and easy!).  Due to the limit of the supermarket next to where I live (in Dubai, also).  I had to use the flaky biscuit ready made dough by Pillsbury (original flavour).  I ideally wanted the original (non flaky) but it worked out perfectly so I suppose it doesn’t matter 🙂

SO here goes, for the easiest version of monkey bread.

Separate the biscuits from the pillsbury can and cut each biscuit into fourths.

In a giant zip lock bag, put in a mixture of 1/2 cup of light brown sugar and the cinnamon.  Add in all the pieces of the biscuit dough (it may stick together at first, but it won’t once you mix it all up).  Shake up the bag so all the pieces get coated in the mixture.

Using your bundt pan, just lightly spray it with cooking spray and then start stacking up the pieces of dough in the pan.  It doesn’t have to be perfect – just put down one layer and then another layer on top and continue till all of it is done.

THEN in a sauce pan, add in the butter and the remaining brown sugar (and whatever mixture is leftover from the zip lock bag).  Melt it all together.  Then pour it over the dough.  Alternatively, make some extra sauce and then as you are layering, pour sauce, then layer, then sauce.  That will make it real saucy and delicious.

The dough will rise and become perfectly stuck together – when it is nice and golden, remove from the oven.

After letting it rest for 5-10 minutes – put it out on a plate (upside down of course) and there you have your delicious monkey bread.